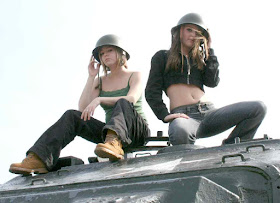 Middle East wars generally don't happen by accident. And since 2006, both Little Satan and Hizb'allah have been prepping for the next round.

The death in Syria last week of Mustafa Badriddine, Hezbollah's top operational commander in Syria, automatically and inevitably raised the fear of another confrontation between Israel and Hezbollah. After all, Lebanese media close to Hezbollah had been quick to accuse the Israelis of killing its storied terror operative.

Hezbollah soon suggested that Israel was not, after all, responsible. Instead, it announced that its man was killed by insurgent groups that the Lebanese Shia militia has been fighting in Syria. Yet while we may never find out the exact circumstances of Badriddine's death, and while the potential for a new and deadly war in the Middle East has, for the time being, been averted, the truth is that an Israeli-Lebanese war that could plunge the Middle East into even greater chaos remains a genuine possibility.
On the surface, this might seem a strange time to sound so pessimistic. After all, this July marks the 10th anniversary of the last major Israeli-Hezbollah conflict. And despite significant escalations, the two sides have managed to avoid a sustained large-scale conflict.
How?
Overstretched in Syria, Hezbollah doesn't want a big fight. And even though Russian intervention has backstopped the Bashar al-Assad regime -- Hezbollah's key ally -- the Syrian campaign has been costly and controversial for the Lebanese Shia organization.
In short. Hezbollah can't afford to open up what could prove to be an even more costly second front, and it cannot be certain that Israel might not strike the al-Assad regime, weakening its stake in Syria.
It's also hard to see how Iran, Hezbollah's key political and religious patron and its key arms supplier would benefit from a war now.
Iran is looking to build on the nuclear agreement with the United States and other powers to strengthen its economy and attract foreign investment. And having to rally publicly and loudly to the side of an organization that the Europeans, Americans and Gulf states regard as a terrorist entity wouldn't seem to further Iran's interests.
Since 2006, Israel and its other non-state adversary, Hamas, have engaged in three serious confrontations -- in 2008-2009; 2012; and 2014
In contrast, Israel and Hezbollah have been much more careful and disciplined in dealing with one another. Hezbollah was surprised that Israel was prepared to launch a massive air campaign in response to the kidnapping of two of its soldiers in 2006, while Israel was stunned by Hezbollah's capacity to rain thousands of rockets down on Israel and shut a good portion of the country down for a month.
Meanwhile, Hezbollah has expanded its rocket and missile arsenal to 150,000, weapons, according to Israeli officials, including precision-guided systems that would put within range Haifa's heavy industries; the Israeli Ministry of Defense in Tel Aviv; Israel's Parliament; and its nuclear reactors at Dimona.
Indeed, earlier this year, Hezbollah leader Hassan Nasrallah threatened Haifa's ammonia storage tanks with his missiles, an attack he claimed -- quoting an Israeli official -- could lead to the deaths of thousands of Israelis.
Clearly, the next war would be potentially devastating for both sides. But that does not mean it can't or won't occur.
For example, Hezbollah is battle hardened, tested and trained in offensive operations in the Syrian civil war. The group is thought by some to be planning incursions across the border with a view to holding territory, even attacking Israeli towns.
And if Hiz'b'Allah plans to change the next war's paradigm, so does Little Satan.
Frustrated with the duration and stalemated outcome of the 2006 Lebanon campaign, the Israelis promise to hit harder and bring the war to a quicker and more decisive end.
How? They won't say. But it would surely involve the massive use of air power against Hezbollah positions, even if they were located in civilian areas, In addition, unlike in 2006, Israel might be more likely to make use of significant numbers of ground forces and elite units, coordinated with air power.
So, while another war between Israel and Hezbollah may not be inevitable, Hezbollah's growing arsenal, combined with its conviction that fighting Israel is part of its identity and legitimacy, means that outright conflict is a genuine possibility. If it comes, it will be devastating -- especially for the civilians on both sides caught in the middle.
GrEaT sAtAn'S gIrLfRiEnD at 1:02 PM