End of the EU? 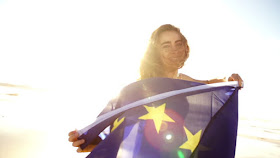 Whoa - now this is undoing a party faster than that 2nd double shot of Jägermeister!

Euro cats all over Europa are asking about their very own referendum and the End is Nigh in many ways for the European Union.

As best understood, EU was thought up to ensure Germany and France would become long life BFF's instead of fighting the Europa Hegemony Wars ever again.

In that sense, EU worked wonders.

Yet, now in the New Millennium...


What stands out is that heads of state and politicians in Europe have been surreptitiously building a much wider political entity. Voters are not asked for their consent. Absence of legitimacy is the EU’s main feature. Since there is no procedure for the democratic right to throw out the [expletive deleted], the EU has developed into something never seen before in the world, an oligarchy with soft totalitarian symptoms.
Conflicting national interests and global economic factors lead inexorably to the hardening of these totalitarian symptoms. Germans are a most remarkable people and they have remade themselves since the Second World War, but successive chancellors have evidently been afraid that they might go ape again — in a phrase of Chancellor Helmut Kohl’s — and they have made themselves responsible for steering the EU through its travails. It is not deficiency of character but just an accident of history that Germany is in the driving seat, turning weaker EU states into protectorates, profiting from the euro while others suffer from it, imposing movements of population that will have demographic consequences, confining free speech, and much besides that is unpopular, not to say alarming.
There is only one way out of this predicament, and that is to amalgamate all the nation-states of the EU into a genuine federation, with political and fiscal unity that is even more unpopular and alarming. The British perceive that this empire must end in full-blown totalitarianism or catastrophic failure, and their vote shows that they want no part of either. Another accident of history underlies the British preference for independence and democracy, never mind if these come at a cost.
However, about half a dozen EU countries already look likely to follow the British lead, and if they did so, then the whole mistaken experiment of the EU could fall apart.
As long ago as 1805 William Pitt the Younger faced a similar crisis with famous words, “England has saved herself by her exertions, and will, as I trust, save Europe by her example.” Yes, yes, and yes again.